Respect in the Workplace

R-E-S-P-E-C-T. Do you know what it means to be? Yes, I realize I’m swapping out a small word in an iconic song, but, Aretha will forgive me because she knows I mean the same thing she did when she shouted to all to have respect for one another.

A few years ago, I was at a conference meeting where I had once again been trying to voice my thoughts on a promotion we were getting ready to do. I was outlining all my ideas as it was a brainstorming session, and everyone just kind of disconnected, tuned out or was going through the motions of listening without really listening to me. It was kind of par for the course; I was rarely listened to in those meetings, but I wanted to voice my opinion. And after my spiel was done, it was met with a: “Thanks for your input, Lysa,” and then on to the next thing on the agenda.

Later, when I was back in my office reflecting on the meeting, I was sifting through my papers and came across a note. It read, “Lysa, I am sorry that no one listens to you in these meetings, and I know that if you were to be in charge we would be in a Fortune 500 company by now.” 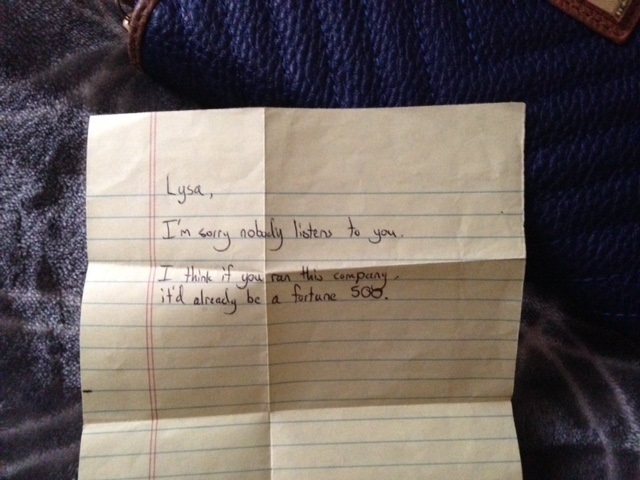 I still have that post-it to this day in my wallet. The fact that someone had written it and put it in my notes for me to find meant the world to me. It made me realize that it wasn’t just me feeling like I was being drowned out by the men in the room, or the fact that I was not as experienced as some of the people in the room. It really was just that I wasn’t valued as a member of the team, at least not by most of the people in the room, save the one who left me the note.

Turns out the note was written by one of the part-timers and he had been watching from the sidelines, not only in that meeting but many others. He had been a part of a lot of our promotional meetings and he wanted to let me know that, when no one else was listening, he was. That while nobody else really valued my opinion, he did. And not only did he value it, he felt it had merit, and that it was a shame no one listened to me.

It’s almost as though no matter what good you do for a company, or how much work you’ve put in, or how much time and energy you’ve placed in a relationship if something goes wrong, it’s like it’s all for naught. They don’t remember everything that was good and positive, they only seem to recollect what went wrong.

Why does what goes wrong outweigh what goes right? Why does one unfortunate incident or one failed project taint the entire relationship, sometimes years in the making? Why does this imbalance persist? I often say, “Don’t throw the baby out with the bathwater.” This saying has been around a long, long time and there’s a reason for that.

I wish there could be another one along the lines of, “Balance every negative with two or three positives.”

The energy just feels so different, and it’s obvious to me that the negativity is more powerful as it’s what gets focused on everywhere. Negativity sells newspapers, it makes for good TV dramas and will cause you to stay tuned to the latest round of sporting events because there’s something to be seen. It’s like a car accident you can’t take your eyes away from.

But why can’t it be flipped? Why is it that positivity has such a bad connotation? When you’re trying to be positive it seems like you’re often met with a negative comment like: “Oh you’re just one of those sunshiny people.” When it comes to value in the workplace, some of the things that I know that feel negative are what makes me feel unvalued the most.

Don’t Let The Door Hit You

It’s like when you’re let go at a job that you’ve been at a long, long time, after years of service with no more than a: “Don’t let the door hit you on the way out.” Or, when you have to turn in your resignation because you’re moving and there isn’t any sort of accolade to that.

You’re not even met with a thank you, you’re just sort of shooed out the door. It’s when your client of several years decides to leave and does not give you any notice, and you’re left determining how to fill that gap because you weren’t even given the courtesy of thirty days, two weeks, or even 24 hours.

“If you truly value someone, your actions have to show that.”

And this kind of behavior is often accompanied by: “Don’t let it affect our relationship.” How can it not? If you truly value someone, your actions have to show that. Value really comes into play when it comes to the respect that you show people.

If you are not trusting me enough to do my job, and you think you can do my job in less time, then why did you hire me? Do you not understand that by challenging me in that way it makes me question what my purpose is? And yes, it makes me feel undervalued.

I’m all for saving a dollar here and a dollar there, for looking for the best price, but, I cannot tell you how many times someone has given me their rate and I’ve told them, “That’s not enough. I know what you do is valued at a higher price point. This is a skill level that should be priced at this rate, so I’m going to pay you that.”

I did it with my plumber.

I did it with the guy that came to patch my roof.

I can’t express more strongly how important it is to compensate people for their work.

When you’re just looking out for the best price, you’re only going to worry about the dollar, because that’s what you’re focused on. But that kind of focus tells that other person: “I don’t really value you; I just want the job to get done and I want the best price point.” It means you don’t really respect them for the job they do.

“Do you choose price over people or people over price?”

The Tone of Respect

We need our sleep, our rest. We need our re-energizing moments, and those can’t happen without respecting boundaries.

Respect is when you meet someone’s ideas with praise, appreciation, and excitement, versus pessimism, negativity, and naysaying. Respect is when you’re not hijacking someone else’s work and pretending like it’s your own. That’s not respecting your audience, yourself, or the person whom you just ripped off.

“You cultivate a valued workforce by sowing seeds of respect.”

You cultivate a valued workforce by sowing seeds of respect. You value and appreciate what people do for you.

A valued workforce means that when someone makes a contribution, whether it be just with an idea in a meeting, with a system, or with a layout, or a design, their contribution is met with praise, respect, appreciation, and an understanding that they will be rightly compensated.

You are trusting someone with the success of your desired outcome, whatever that may be, in whatever work you do.

Respect them and yourself by valuing that partnership.

The Value of Contribution

The Value of Contribution