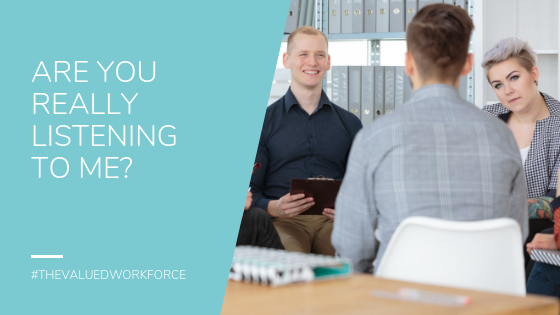 Have you ever been talking with someone, and you can tell right away they’re not really listening to you?

It’s not just the eye shifts or even the body language. Sometimes they could be staring dead at you, but you can just tell their mind is not with you, and they’re not fully listening to what you have to say. They might even pick up the last few sentences of what you said then reposition it as a question just to keep you talking, so they can continue daydreaming about whatever it is that’s on their mind.

As a verbal processor, I tend to talk a lot. I need to talk out a lot of things when I’m having to think through items, and I realize it can be overwhelming for those who are not verbal processors. Recognizing that this is how I sort through things has helped me a lot because I can prepare the person who’s collaborating with me that “Hey, I’m going to have to talk this out for a minute.” In those instances, they don’t have to listen necessarily.

It actually wasn’t until I worked with someone who was an excellent listener that I recognized how awesome it feels to be really listened to.

A good listener is 100% there. They’re not just paying attention to the words that are coming out of your mouth. They’re paying attention to you. All of you. They pick up on tones and things that are not being communicated through words. I’ve always admired people who have a knack for doing this. They’re usually labeled people with high intuition, and they basically can read between the lines and see things that are not being said. They’re able to be there in a way that doesn’t feel like it’s just paid lip service.

When I work with Bekka, I’m always blown away by how amazing her listening skills are. So much so that I’ve actually started to use her as my mental vision of who I want to exemplify when I’m trying to listen to someone. Being present in the moment, shutting off my mind, and truly being there for the person and listening to them is a way for them to feel truly valued.

There are times when I’ve talked to people and noticed that not only are they not listening but as soon as I’m finishing the little bit of a thought I have, they’re quickly switching conversation back to them. You realize that they asked a question like “How are you?” just because they felt like they had to in the conversation flow. They don’t really care how you are; they were satisfied with your generic “I’m fine.” Or maybe you said, “I’m not doing so well,” and they politely asked what’s going on. You go through your spiel and then at the end of it, they’ll say something like, “Well, that’s too bad,” and then circle the conversation back over to something else.

It’s in those moments that I wonder why they bothered to ask me at all. It feels like lip service, and they obviously didn’t care how I was really doing because they didn’t delve in and ask me any questions. They just took what I said and left it there.

A good listener reads between the lines and helps you feel valued in a way that is different than anything else.

It’s such a simple thing to listen to someone. There are small nonverbal things that a person can do in response to someone else, and these little, simple things can go a long way to help someone feel like they matter.

When you’re dismissed in conversation and not listened to, it’s such a loud message. The lack of interest — or the straight up silence — speaks volumes. The person that’s receiving the silence or the dismissive “Oh, that’s too bad,” walks away feeling a little smaller. You almost see them pulling into themselves. There’s no point in going down an emotional path if all you’re going to be met with is some throwaway line. Of course, the next time you’re asked, you’re just going to say, “I’m fine,” because that’s what you know and what you’re being conditioned to express.

There are messages you start to internalize when you feel like you’re not being listened to. You start to think no one wants to hear about your problems or how you’re really doing. You’ll just say you’re fine and call it a day because it doesn’t really matter.

It’s funny how we are chatterboxes when it comes to gossip. We have no problem listening and being interested when it comes to putting people down yet we’re not willing to take the time to listen to someone else who might just need to talk.

A good listener reads between the lines and helps you feel valued in a way that is different than anything else. Click To Tweet

So how do you become a great listener?

I suggest you start by flipping the script and asking yourself some key questions:

Some people are more conversational than others and some people are also more open than others. Some people feel very uncomfortable when people break down or have an emotional crisis. But I’m not just talking about that. It doesn’t always have to be in dire situations that you then pay attention and listen. It can be with the good things too.

You want to follow up and show people that you really do have an interest in who they are. Taking an interest in someone is part of listening and is the foundation of feeling valued.

For employees and employers, for bosses and leaders, it is critically important that you’re really hearing what your team has to say. A lack of follow-through on what your employees have said will hurt you in the long term. Your team won’t trust you, and they certainly won’t be interested in sharing their thoughts when you’re asking how everything’s going within the work environment. Because if you’re not going to do anything to follow up on it, they’ll end up apathetic and wondering why you even bothered.

At the end of the day, better listening means forming stronger bonds with the people around you. Building trust takes time, and listening — along with responding thoughtfully— is the first step towards forging long-term relationships where everyone benefits.

Lysa is a digital producer who helps service-based entrepreneurs fulfill their business vision through creative ideation, technical solutions, and relationship marketing. With 19 years of diverse experience in broadcast and digital media, she provides a wide range of opportunities to work with a variety of clients and teams, both virtually and in-person.

& be a part of a valued workforce?

Sign up for our monthly newsletters - they're free, delivered straight to your inbox once a month, and include actionable insights, tips, and resources.