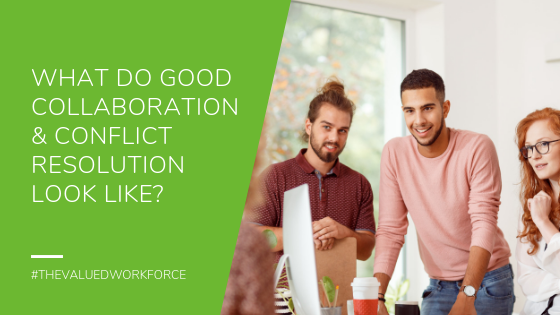 There’s an old adage that says, “Respect is earned, not given.”

When I think of that statement, I would agree it’s mostly true. However, it may not be as applicable in a collaborative environment as it is in a traditional workplace.

When you’re working on a project with a team of collaborators, everyone is going into the project as an expert. There generally isn’t a traditional structure or hierarchy of power because everyone is starting from an even, equal playing field. For your project to be successful, you have to immediately start off your relationships with fellow collaborators with respectful interactions.

That’s the reason why it’s a collaborative environment.

Over time, as you work with your collaborators, you will likely earn their respect — and them yours — but it’s a natural progression. However, it’s almost an unwritten rule that you come into a collaborative situation with respect for your colleagues, no matter their background or experience. You assume everyone there is a strong contributor and treat them accordingly.

Whoever the project lead is clearly has put together this team for a reason. There should be no expectations of anyone “proving” themselves before you’re willing to treat them as an equal. Instead, all of the collaborators prove themselves over time through the quality of their work and their work ethic. And if you’ve ever collaborated on a project, you know full well that those things become apparent very quickly.

Setting Yourself Up for Success

Part of being an effective collaborator is understanding yourself, first and foremost. You should already know your strengths, areas of opportunities, triggers, and what tools you have in your toolbox. Fully understanding your capabilities and your limits is the strongest way to go into a respectful, collaborative environment.

Next, you have to understand your team. You need to understand how they communicate, their triggers, strengths, and weaknesses, and be really honest. This can only happen by fostering an environment of open communication with your team.

Open communication is critically important because having transparency keeps things from festering under the surface and eventually boiling over. Everyone can be open and honest with their feelings, their timelines, and how they feel about the work environment, and this allows for greater collaboration.

The last piece of the puzzle when trying to set yourself and your team up to be as successful as possible in a collaboration is to understand that you have value. Your contribution to the group is equally as important as another collaborator’s.

Knowing your value allows you to have a high level of confidence in your abilities, so if a situation does arise where someone is disrespectful to you or your work, it’s not going to completely derail the project. You KNOW you produce a high quality of work and you understand what you are bringing to the table. What you contribute to the collaboration is extremely important and an integral part of the project’s success — otherwise you wouldn’t be there in the first place.

As much as I’d love to say it’s all going to be smooth sailing, sometimes that just isn’t the case. So what happens if, despite all of your preparation, things aren’t going very well with your collaboration and you or your team feels disrespected and undervalued?

Over the years, I have learned there are three very easy ways to handle disrespect without derailing a project.

It starts with the old saying, “Actions speak louder than words.”

In a collaborative environment — or actually in any work environment — the way that a person acts is going to give you every bit of information that you need to know about that person. What they do is who they are.

Now, this isn’t necessarily a negative thing. The actions a person takes (or doesn’t take) show their character and their follow through, whereas words just prove who they want to be. When you’re in a situation in the workplace where someone is being disrespectful, how that disrespect manifests doesn’t really matter. It could be dropping the ball, speaking harshly, or just not valuing the contributions of other collaborators.

Regardless of what they’re doing, it’s how you handle it that really counts.

I’m a big proponent of taking a pause. It’s all too easy to react in the moment to something that was said or written, but that is pretty much never the right course of action. Instead, you want to pause and let yourself cool down — THEN you can clarify.

Clarifying the message is absolutely critical because sometimes (especially if it’s virtual communication) we have an inability to tell the tone or the intended tone of what someone is saying.

If someone says something in black and white, be it text message or email, you want to understand the context. Because, sometimes, it’s as simple as the message being interpreted differently than from how it was intended, and once you know that you can move on.

A Good Solution Is Never One-Sided

The way that you handle these instances is to talk directly to that person. This should be done in private. Always. Not only because you don’t want to affect the efficiency of the rest of the team but because you want to model the courtesy you expect from that other person and show the highest level of integrity and decorum.

Now, to be clear, this should be a conversation — NOT a confrontation. You want to approach the situation with a level head.

At this point, you may be thinking, ”Can’t I just send an email?” And the answer to that is NO.

The last thing you need when trying to iron out a possible miscommunication or misconception is to add more communication that can be interpreted the wrong way. You don’t want to make things any more complicated than they are, and that’s why face-to-face is the best approach.

When you meet, your goal should be to be as forthright as possible. Firm but kind. You want to cover three main points:

Your goal should be to open the door for them to acknowledge what has happened and work with you to come up with a potential solution to the problem. When people can collaborate to solve a problem, it’s going to make the team stronger in the end. Collaborative solutions are always going to be preferable and more successful than any other type of one-sided solution.

If you aren’t quite sure what a one-sided solution looks like, deciding to ignore the person, being passive aggressive, or devaluing their work are all in that category. Sure, ignoring them may solve the problem temporarily, but it doesn’t address the root issue. How can you effectively collaborate with someone you are avoiding? Obviously, you can’t, and a one-sided approach will impact your work as much as theirs.

Don’t Dwell on What You Can’t Change

If you’ve made an attempt to communicate, but the other person isn’t willing to come to the table, then at that point, it may be time to put some distance between you. It should be noted, though, that people process things differently, and maybe they don’t want to come to the table right away. Maybe it’s going to take a little bit for them to come around and figure out where they’re coming from. And that’s okay! But you need to give them that opportunity.

Should you find yourself at a crossroads where a fellow collaborator isn’t willing to discuss the situation, you can’t dwell on it. You have to understand that if they are making a decision to not sit at the table with you, then it has to be okay. You can never force somebody to do anything that they don’t want to do.

Understand that they may not have the tools in their toolbox to resolve conflict, or they aren’t used to having someone call them out when they’ve crossed a line.

You have to then decide that it’s not going to affect the caliber of your work. You’re not going to disrespect them, you’ll just figure out how to work peacefully in a parallel way. If and when it begins to affect the quality of the project, at that point, you should consider bringing in whoever is leading the group and apprising them of the situation.

The reality of collaboration is that, sometimes, you just have to accept the nuances of people and their personalities. You’re not going to make everybody happy, and that’s okay.

Have you ever experienced a collaboration that went from fabulous to frightening? What happened and what did you do to save the relationship? Share your story in the comments below!

Lysa is a digital producer who helps service-based entrepreneurs fulfill their business vision through creative ideation, technical solutions, and relationship marketing. With 19 years of diverse experience in broadcast and digital media, she provides a wide range of opportunities to work with a variety of clients and teams, both virtually and in-person.

& be a part of a valued workforce?

Sign up for our monthly newsletters - they're free, delivered straight to your inbox once a month, and include actionable insights, tips, and resources.